Ornamental grasses have become very popular lately and I think it's because they're very versatile when it comes to care and maintenance.
Grasses had dimension to any garden with texture, form and colour. Great for rock gardens, borders or as specimens in flowers beds.


Grasses very in their growth habits.

Some Ornamental grasses are true annual and some are perennial.
Some form clumps of foliage that grow straight upright and stay in a clump.
Others spread rapidly from rhizones ( roots forming underground) or stolons ( roots aboveground) and of course it happens to me most of my favourite grasses. :)

Cool-season growers and they are evergreen and do best during the cool months.
Warm-season grasses will go dormant during the winter.

I really don't do anything. They're low maintenance!
Adapts to a variety of soils - from Sand to Clay.
Most grasses like full sun except to Hakonechloa - it can tolerate shade and likes moist rich soil. Ornamental grasses, once established they are drought resistant and pest free.
When I planted my grasses ... I just dug a deep hole, filled it with half of compost and mixed it the surrounding soil.


Cutting back the ornamental grasses

I do this in the spring.During the winter the birds feed off the seeds heads and the grasses insulates the soil.
In early spring I grab handfuls of grass and use a serrated Knife and cut them down to about 3-4 inches.
Then magic happens - you start seeing wisps of grass in early spring and the season begins. :)
( Lately mice or some Kritter noticed the grasses and decide to make their home. They ate all they could and then started chewing on the bark of the shrubs around them. Back to cutting the grass in the winter before the snow falls. )

Grasses are easy to propogate from Seed or Division.
I use roots divisions when it's time to divide the grasses.

To harvest the seed heads.

Cut a bunch of seed heads, tie them and let them dry upside in a cool, dry place and out of direct sunlight. Pick your seed heads before they're ready to disperse their seeds. If they're starting to fall apart you can spray them with hair spray. Dried grasses and seeds heads would make a beautiful addition to a fall wreath. 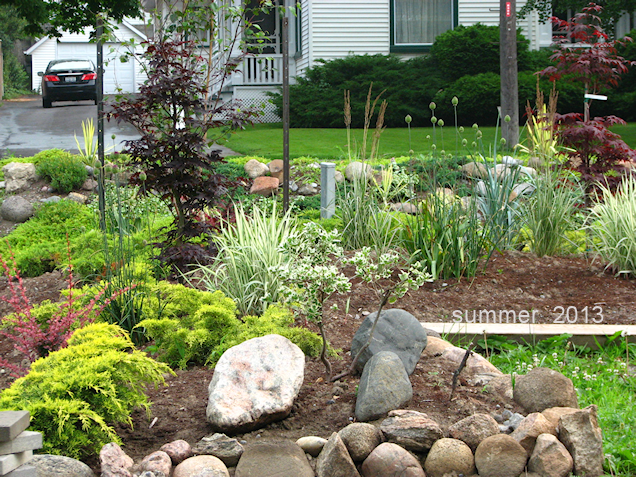 - first year of growth - they were beautiful!